Irodori Comics has given us a free review copy of Isaki Uta’s Leaper, a one-shot doujinshi that has been years in the making. For those who don’t know, doujinshi isn’t the racy comics that some might think of. They are self-published works that can be the main source of income for manga artists who completely fund the work themselves.

Being a small publisher themselves, Irodori collaborates with those artists and helps in localizing and minimizing costs for the mangaka (manga artists) while also giving them a more worldwide reach outside of Japan. The reason doujinshi can be so expensive is that the mangaka is doing all the work, so those sales go right back into their pocket, but the content inside is completely worth it. They are able to expand and do so much more without the restricting eyes of big publishing companies.

There are those born on a date that occurs only once every four years. These people are called “leapers” — individuals who age biologically at a rate four times slower than that of normal people and go on to live for over 300 years. Mio Aono is one such person and she, like many other leapers, experiences and sees life through all its mortal limitations.

It’s February 29, 2008, and you’re in a maternity clinic. A bittersweet moment of the best part of your life and the most difficult; your child is a Leaper. Every four years to her is one of yours. The likelihood of you seeing your child grow up and be successful is slim in a twisted set of fates.

After reading this comic I thought back to my niece who was so close to being born on a leap year. She would have had a life as she does now, but as for little Mio Aono, that’s not the case. In her fourth biological year (actual age of 16), she enters kindergarten and meets a boy who doesn’t treat her differently until he ages out of her class. She continued to see life as if it was in moving in fast forward. Every year she stays behind watching her friends and loved ones grow and leave her in her youth.

I couldn’t imagine how it would feel to have a moment so brief but last for a lifetime. To carry on the memories of so many people that you’ve grown with centuries past their prime and being reminded of them. It reminds me of just how serious life and death are; how each moment is absolutely precious. You never forget those moments long after losing a person be it death or just disconnect, you just remember the purest memories. 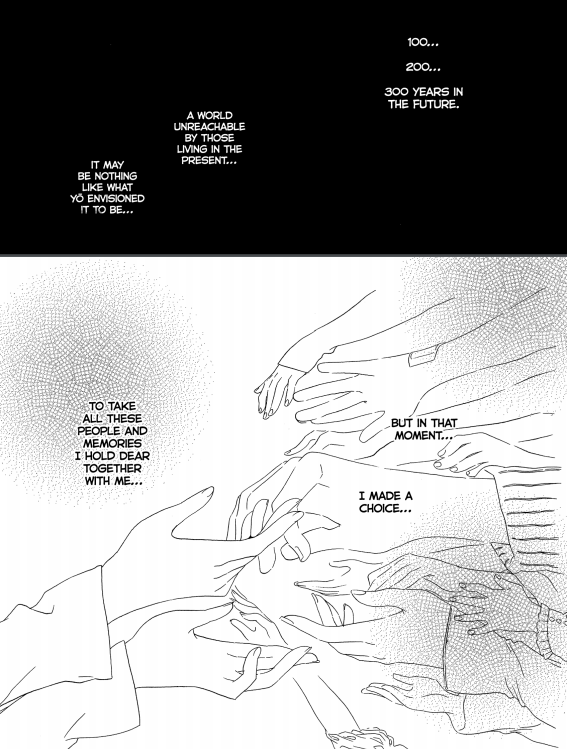 In a different way, it showed the vulnerability of a child. How a reputation can precede you affects every aspect of your life. When Mio started middle school, her being a Leaper caused people to deny her any form of friendship before getting to know her. She still felt the joy and the loss of friendship, the desire for change, and the pain of life.

Life is far too short to worry about the things you can’t change. This comic was done so beautifully in piecing together life, time, and emotions. The art, while rough conveyed each emotion in such a way that you see and feel the pain and struggles of each character and the burdens they carry. I would definitely recommend this unique work by Isaki Uta.

Find your next favorite doujinshi at Irodori!

2 thoughts on “Leapers: a review”